CEO of the Month- Paul Kehoe

The airport, which is located in the constantly growing city of Birmingham, sees around 100,000 aircraft movements every year. Paul explains a little more about his role as CEO and how he ensures that each of these movements goes without incident.

“My role as CEO is as chief plate spinner, keeping all of the metaphorical plates spinning, whether they be with regards to security, environment, passenger, local government, or even staff. There are many different aspects to my role, and it’s my overall job to make sure that these different sections of the airport are constantly in harmony.

“No two days are ever the same, there are changes happening all the time within the airport and as such my role changes day by day. My diary is run by a very competent PA, and she feeds me with information and I work from that, managing the company through a series of meetings as the senior ambassador of the company, to get the message out to the world that Birmingham and the surrounding areas are a thriving manufacturing, banking and business region which is growing constantly, and supporting the expansion of the airport.

“Therefore you could call me the principal salesman: selling not only the airport but also the region and its story.”

In addition, one of Paul’s main tasks is leading his team, who are responsible for the day to day running of the airport. Paul explains his management style and how he endeavours to ensure the smooth running of the vast infrastructure over which he presides.

“A large part of my role is managing the team and creating a vision for which they can aim towards, whilst recognising that I do not control all of the rules within the airport, as these are often down to policy makers and other public controlled organisations.

“As such working within the airport can be challenging, but it is a challenge which I believe 90% of the staff working for us relish. As CEO I always look out for staff who will come along on the journey with me and are able to challenge management when they feel appropriate. Additionally, I like my staff to walk the walk: when they say something, they should do it. We have a programme called ‘Great People’, which allows staff to take on additional responsibilities and receive rewards, such as additional bonuses which recognise when they have undertaken tasks which are beyond their role.”

At the airport there are over 8,000 staff, of which just 700 work directly for the airport. The remaining 7,300 are from other firms. Paul explains the role of airport staff and how they function to support these external firms.

“In order to work with these firms we have to first persuade them to join us. To do this myself and the aviation development team visit Routes, the international airport convention, once a year, making a 20 minute pitch to
airlines to encourage them to serve the airport. What we sell to them is not the fact that we have a runway or a control tower, because they already know that; what we sell is the fact that we are situated in a growing region, with a strong economy and easy accessibility to regions such as London and Manchester.”

Working with so many firms and dealing with so many different rules and regulations could seem like a challenging task, but as Paul points out, the key is to make it as simple as possible.

“Ultimately I always aim to make everything as simple as possible, because what we are is a transportation mode, we take passengers from one form of transportation and we put them onto another. Our aim is to do that as efficiently
as possible with the least impact on our community, whilst making the most profit possible for our shareholders and asking for the least money from our investors so they get value for money.

“Keeping our message simple is key to running the business, because although the rules and regulations around running an airport can seem quiet challenging, as long as we use a simple approach we can deliver to every one of our stakeholders, which is key. Whilst we aren’t always able to get it right every time we always learn from our mistakes and try and improve all the time.”

Paul adds that the overall mission of the firm is as simple as their message.

“We used to have a highly complicated mission statement, but thinking it over I realised that overall our mission is to deliver across each aspect, whether it is reducing noise, improving services or increasing profit. Most companies say
they will deliver, but ultimately we ensure that we do deliver.

“Many airports want to be the bestof the best airport, however we aim just to ensure that we deliver on what we have promised, because this is the most important factor in securing long term satisfaction for all of our shareholders.”

The biggest challenge in recent years, according to Paul, has been the poor performance of the UK and world economies, and it is one which airports such as his have had to work hard to overcome.

“The poor economic performance of many world economies has seen us going backwards between 2007 and 2010, to a point when we reached a trough in 2010. Now the challenge is to cope with the sudden influx of growth and to maintain that growth within a very uncertain future.

“What we are seeing is significant issues with regards to rising customer service standards, where customers expect more but want to pay less. We are also seeing increasing legislation, mainly with regards to security, which can lead to vast expenditure.

“However, we are seeing a number of growth opportunities worldwide, which is phenomenal considering that many other countries are expanding into aviation development, including India, Indonesia, China and many others. These are generating passengers who want to come to the UK, offering us new opportunities for growth.”

As when this growth occurs new safety and security challenges emerge, but according to Paul this is the airport’s top priority.

“These security and safety challenges mean we have to adapt constantly, putting in increased layers of security and constantly adapting to ensure that we don’t make mistakes and are vigilant at all times, as we want to make sure that passengers have the safest possible journey. We also work with government to ensure that we are always up to date with the latest security laws and regulations.

“We were the first to improve our means of processing bags, for example, to ensure that it is as secure as possible.

“Overall we have always been a very innovative firm, both in terms of security and other aspects of our work, and we aim to stay ahead of any emerging developments as much as possible.

“For example, we have created a revolutionary exploratory area designed within our airport for younger passengers, which attracts younger children and has staff to look after them whilst their parents enjoy the airport.

“The ultimate goal is to be at the forefront of emerging developments and always be as innovative as possible. Some ideas, such as our holographic assistants, have not worked for our passengers, but we have learned from these mistakes and moved on to try new ideas. This approach has kept our airport at the top of the Which? Airport survey, of which we usually come in the top three.”

As an area, Paul believes that Birmingham is going through a renaissance as people realise the city’s proximity to London, which is leading to a revival in manufacturing and other industries.

All of this is bringing increased business to the airport. The region is at the centre of both the UK rail and motorway network, and the Government’s Midlands Powerhouse scheme will help reinvigorate the whole of the Midlands, bringing a number of exciting opportunities, including a HS2 station, as Paul highlights.

“These exciting changes will bring about an integration of road, rail and air, which we have never seen before, and which will provide numerous business opportunities for Birmingham Airport.

“The future looks positive for the airport. As long as GDP remains strong, which it seems to be then we will see continued growth in air travel. So far we have seen 11 new airlines starting to make journeys from Birmingham in the past 12 months, and this looks set to grow in the future. There may be some challenges along the way but as long as we have the right attitude we will be perfectly positioned to take advantage of every growth opportunity that comes our way.” 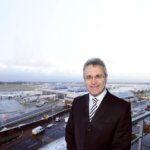