A rising level of threats to business, and increasing numbers of regulatory requirements, are combining to ensure in-house general counsel are no longer focused solely on company legal matters. Instead, a new report from KPMG reveals that in-house lawyers’ work is dominated by commercial decision making as boardrooms seek validation of their business and operational plans.

The report, which is based on a series of in-depth interviews with general counsel, reveals that senior in-house lawyers have adopted six new core functional responsibilities, in addition to their role as legal advisers. Chief amongst these is a focus on cyber security, as concerns rise about the risk of data breaches brought about by human error and intentional sabotage.

Malcolm Marshall, global head of cyber security at KPMG, said: “In the last five years we’ve seen cyber security move from the back room to the board room and, in extreme cases, the court room. Against this sort of backdrop few people will be surprised to see it come in as the fastest growing risk for general counsel and that’s why in-house legal teams should have a seat at the table providing advice about the policies and vigilance required to tackle cyber risks for business.”

In addition to the new focus on cyber security, the report highlights that general counsel are now expected to manage:

• enterprise risks, such as geo-political events or technological failures

• corporate liability for the conduct of third-parties

• execution of contracts, in addition to long-held expectations around the negotiation and drafting of contracts

• flexible approaches to dispute resolution, rather than an outright reliance on negotiation.

KPMG’s analysis goes on to reveal that there is a growing demand for in-house lawyers to conduct due diligence of suppliers, customers and other business parties, as corruption through the supply chain is tackled through increasingly tough legislative and judicial actions. According to the report, senior executives are also turning to their legal teams in recognition that their professional training ensures general counsel can ‘take on complex issues, distil them and arrive at a sensible conclusion’ with many respondents indicating that their lawyers are more likely to find solutions to common business problems, than colleagues in other business departments. 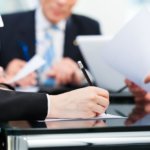