Engineers will need the kind of drive and determination shown by the great wartime innovators such as Sir Barnes Wallis and Sir Frank Whittle if they are to respond effectively to challenges such as climate change, University of Cambridge Reader in Engineering Dr Hugh Hunt will tell the Royal Academy of Engineering today.

Giving the Academy’s Autumn Lecture on Tuesday 3 November, Dr Hunt will compare today’s challenge of adapting to future climate change with the imperative to develop new technologies to tip the balance of military capability in favour of the Allies during World War 2. Necessity fuelled many technological developments during the 1939-45 period that decisively influenced the course of WW2, including radar, the Enigma machine and the jet engine.

However, it is the sheer scope of Barnes Wallis’s lateral thinking in developing the bouncing bomb that fascinates Dr Hunt and epitomises the approach he thinks is now required from modern engineers in responding to climate change. Despite Bomber Command’s belief in the effectiveness of area bombing, Wallis saw it as a very blunt instrument and managed to persuade “Bomber” Harris to consider his idea of blowing up key German dams in order to cripple the steel industry.

“Barnes Wallis responded to the emergency of his time with extreme lateral thinking,” says Dr Hunt, “and we need that mentality again now if we are to move towards low carbon energy and provide clean water and food for the world’s population. These are the great challenges of our time and we need to look at much bolder solutions, like designing structures to have multiple functions.

“Flood defences are a great example of where this might help – you can use them to generate tidal power when they are not needed to prevent flooding. Perhaps such a scheme at the mouth of the River Parrott could be used both to generate power and to protect the Somerset Levels from flooding.

“Personally, I think we may actually be too late to mitigate the worst effects of climate change and that we also need to be looking at truly radical geoengineering schemes like re-freezing the polar ice caps. The fact that it sounds completely mad would not have put Barnes Wallis off, and we need more of his kind of unrestrained imagination coupled with technological genius.” 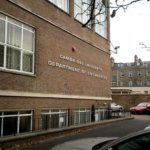