The move, widely expected by industry analysts, allows the company to simplify its operations. It will see its silver, aluminium, manganese, nickel and coal operations be moved.

The new company, valued at $14bn (£8.4bn) and presently known as NewCo, will list on the Australian stock market (ASX). It will be headed by BHP’s present financial director, Graham Kerr.

The move is subject to approval from shareholders and regulators and is expected to complete in Q1 of 2015.

According to the company, the demerger will allow BHP Billiton to give more focus to its core business operations in the production of coal, copper, iron ore, petroleum and potash, with the chief executive of BHP saying in a statement:

“By concentrating on what we do best, the development and operation of major basins, we can improve our productivity further, faster and with greater certainty,”

The announcement was made following a statement released last week that said BHP was looking at ways that its operations could be simplified. The firm said the changes to its corporate structure would allow for its cash flow generation to be strengthened, giving shareholders a better return on their investments.

With its global headquarters based in Melbourne, BHP Billiton is listed on both the London (LSE) and Australian stock markets. It is also secondary-listed on the Johannesburg stock exchange (JSE) in South Africa and is listed on the New York Stock Exchange (NYSE) across two American Depositary Receipt listings.

The new company will also have a secondary listing in South Africa.

BHP Billiton also announced a 23% rise in profits to $14bn for the year, missing industry forecasts. The firm’s shares on the LSE dropped by over 4% after the announcement on Tuesday morning. 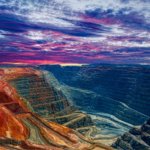