If resurrected, a merger between the two firms would see the creation of a construction giant with a combined worth of £3 billion.

The problems occurred when Carillion seemingly advised Balfour representatives to abort the marketing of its Parsons Brinckerhoff arm. A US-based engineering and design firm, Balfour advertised it for sale in May after it failed to reap the rewards expected following its acquisition in 2009.

Balfour Beatty has said the demand was ‘wholly unexpected’ and that to change the terms so significantly was ‘not acceptable’.

Now, however, reports the Guardian, advisors from both firms are meeting again to broach the possibility of restarting the talks. Carillion is still convinced that the deal would bring significant value for shareholders of both entities.

However, it remains convinced that it would be the wrong move to drop Parsons Brinckerhoff.

There are only ten days left to resurrect any talks however, with UK legislation dictating that an offer must be made by August 21 or Carillion must step away from the discussion.

With profit warnings and the departure of CEO Andrew McNaughton accompanying news of the proposed sale of Parsons Brinckerhoff, Carillion saw its chance. An all-share merger deal was subsequently put to the Balfour board, despite it being the far bigger concern and posting revenues of £10bn in 2013.

Many industry commentators have predicted a tie-up between the two will realise total cost savings of £250m. Other analysts suggest Balfour could be past the worst of its troubles though, suggesting that a strengthening construction pipeline workflow will help the firm win domestic contracts again – something it has failed to do of late. 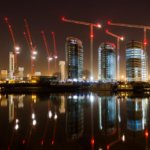