BAE Systems has received a multi-ship, multi-option (MSMO) contract from the U.S. Navy to repair, maintain, and modernize nine destroyers and cruisers, either homeported in or visiting Pearl Harbor, Hawaii.

“Our sustained, outstanding performance on the first MSMO award paved the way for this follow-on contract,” said Bill Clifford, president of Ship Repair at BAE Systems. “The Navy clearly recognizes our achievements and success in maintaining and modernizing these ships to ensure the readiness of the fleet. This award speaks volumes about the dedication and commitment of our highly skilled workforce, as well as our island suppliers and small businesses.”

The new contract, coupled with similar MSMO contracts in Norfolk, Virginia; Mayport, Florida; and San Diego, California, reinforces the company’s trusted partnership with the Navy. BAE Systems has successfully completed more than 300 cruiser and destroyer availabilities over the last 20 years. 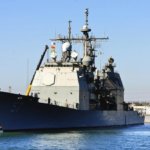