AstraZeneca, the UK drugs company, has rejected a “final” takeover offer from US drugs firm Pfizer.

Pfizer had offered £53.50 on Friday but AstraZeneca told Pfizer at the weekend that the price needed to be at least 10% higher, valuing AstraZeneca at about £74 billion.

Pfizer made a new offer of £55 per share, valuing AstraZeneca at about £69 billion, an offer that AstraZeneca’s chairman Leif Johansson said did not meet the price that the US company was told was necessary.

AstraZeneca’s shares fell 14% to £41.45 after news broke of the rejection.

Pfizer’s moves to take over AstraZeneca have been surrounded by controversy, with politicians and unions expressing fears that a takeover would hinder AstraZeneca’s drug research and lead to job losses among the firm’s 6,700-strong UK workforce.

Pfizer planned to create the world’s largest drug company, with its headquarters in New York, but based in the UK for tax purposes – a strategy known as “tax inversion” whereby Pfizer could pay the UK corporate tax rate of 20%, rather than the 35% rate applied in the US.

Johansson said Pfizer’s pursuit had been “fundamentally driven” by the corporate financial benefits, adding that “Pfizer has failed to make a compelling strategic, business or value case.”

Pfizer had said that its improved offer of £55 per share was “final” and could not be increased. 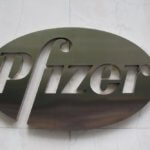