Air Pollution and how it is impacting our health

The ever-mounting climate crisis has become a major point of concern for national and global populations, as aggressive heatwaves sweep across Europe and the clear effects of man-made pollution are laid bare. But the source of the disruption is not only harmful to the planet’s natural systems and processes; it has also been demonstrated to be directly harmful to human life.

The key driver for climate disruption has been air pollution, in the form of both toxic particulates and greenhouse gases. Various estimations have been made as to the cost to life represented by man-made pollution, but the starkest figures suggest that 8.7 million
people have died from air pollution caused by the burning of fossil fuels alone.

The burning of fossil fuels releases carbon particulates into the atmosphere as well as CO2 and carbon monoxide. But fossil fuels are only one part of a much wider problem, which
encompasses industrial processes and urban habits. What are the real risks to life that stem from exposure to air pollution?

Air pollutants have recently been linked to increased incidences of autoimmune disorders, such as Crohn’s disease, ulcerative colitis and rheumatoid arthritis – the latter of which was 40% more likely in those exposed to air pollutants long-term.

Much of the burden here lies on urban environments and the suspension of exhaust fumes from congested city roads. However, industrial by-products have increased risk significantly for industrial and ex-industrial communities, necessitating businesses to take air pollution control measures more seriously.

Air pollution and cancer risk are already understood to go hand-in-hand, with the links between cancer and smoking well-documented and comprehensively proven. While air pollution is less likely than smoking to result in cancer, Cancer Research UK nonetheless report that around 1 in
10 cases of lung cancer is caused by air pollution.

The explanation given is that the harmful particulates suspended in polluted air can damage the DNA present in lung cells, leading to mutations and the development of cancerous material.

The risk posed by pollutant material to the lungs is much more holistic than the potential alteration of DNA in cells, though. Air pollution is also known to exacerbate asthma, and contribute to the onset of disorders such as COPD.

Air pollution is an ever-present threat to life, far beyond the disruptive effects it is having on the environment around us. While climate change should be a key concern for governments and communities, the direct effect of pollution should not be discounted.

As the world continues to industrialise itself, pollution becomes more rampant. Today, polluted air is the norm in major urban centres, despite the profound risk posed to the average citizen. Simple measures could make a major difference, and a commitment to net-zero could have more of an impact than we may truly understand. 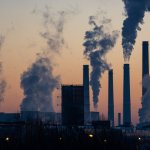