Engaging with employees aged under 25 is important for any organization which has ambitions for a prosperous future. And yet members of Gen Z have unique needs to meet, and specific values to cater to if you want to bring them into the fold and keep them loyal in the long term.

With that in mind, here are just some of the strategies you can use to get the attention of a new generation of talented team members, and ensure that they are satisfied once they start working for you.

Gen Z grew up with internet access as the norm, and so they’re adept at researching everything, whether that’s a product they’re thinking about purchasing or a job opening they’re considering applying to.

This means that you can expect them to look into prospective employers to establish if they are up to scratch and have a good reputation for looking after workers. As such you have to take the initiative and be as transparent as possible, because any sign of subterfuge will be taken as a real red flag.

A good option is to ask current employees to write a review on JobSage or an equivalent platform. This will allow jobseekers to read impartial feedback on what it’s like to be an employee within your organization, and could prevent reticence from applicants who might be put off by a lack of such coverage.

A generation or two ago, the standard nine to five workday and the five day workweek was pretty much set in stone, as was the concept of commuting to an office and sharing the same physical space as your colleagues.

Today, all of these things have been turned on their head, and a combination of flexible working hours and remote working are now expected to be offered by many, especially those in Gen Z who have likely experienced the first few years of their working life in this context.

While the gradual return to traditional office culture is occurring, the reality is that for a lot of the top talent, any employer which doesn’t provide at least a modicum of flexibility will be seen as old fashioned and thus undesirable.

We may have moved away from the era of lifelong jobs within a single business, but that doesn’t mean Gen Z workers aren’t career-focused.

To attract them, you need to either lay down a clear path of potential progression internally, or indicate that they will have the opportunities to furnish themselves with the skills and training needed to make them attractive to any other employers they move to further down the line.

It might seem counter-intuitive, but lots of large corporations are embracing the process of outskilling. Basically, businesses have grown to recognize that if the entire workforce is better trained, then everyone benefits. And in terms of attracting employees, it’s definitely a big selling point for your firm.

Another aspect of Gen Z employees being digital natives is that they have a low tolerance for a lack of tech. If your business doesn’t have the latest software solutions, whether powered by the cloud or enhanced through AI and automation, then it will once again look a little archaic.

This isn’t just about personal preference, but about productivity. Software and hardware can accelerate all sorts of tasks, and streamline an entire organization’s operations, so don’t just make this change to bring Gen Z job applicants through the door, but also to benefit your business as a whole.

We are only just beginning to see Gen Z employees enter the world of work, and yet already there’s been a strategic shift needed to engage with them.

Rather than wasting time, it’s worth adapting now so that your company is well positioned to court, catch and retain Gen Z workers. 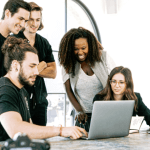