6 Types of Lung Disease … Plus Key Risk Factors to Avoid

Many people associate lung disease with smoking. True, the CDC says that 80% of lung disease-related deaths are due to tobacco smoke.

But there are many other causes and risk factors, depending on the type of lung disease in question.

In this article, we’re going to discuss several types of lung disease, including COPD, and then list some everyday risk factors that you can avoid.

The Causes of Lung Disease

In short, lung diseases are either infections or disorders that damage the lungs or interfere with the breathing process. While some are curable and avoidable, others are unpredictable and can even lead to respiratory failure.

Read more about what causes lung disease before we consider each category of disease and possible risk factors.

COPD involves a group of lung diseases that do similar damage: they block the airflow, which makes it difficult for a person to breathe. Chronic bronchitis and emphysema are both conditions of COPD.

Chronic bronchitis involves inflammation of the bronchial tube lining. Symptoms include wet cough, wheezing, and excess mucus production. Emphysema involves damage to the smaller air passages called the bronchioles, which results in air being trapped in a person’s lungs.

Asthma involves inflammation of the airways, which leads to shortness of breath.

Risk Factors: Allergies and viral infections can also cause other diseases, like acute bronchitis or cystic fibrosis, which involves difficulty getting rid of mucus out of the bronchi.

You might even buy an air filter to reduce some of the allergens in the home.

A number of diseases affect the air sacs, which connect to the bronchioles, and make up the lung tissue. Pneumonia, tuberculosis, and COVID-19 are infections caused by viruses or bacteria.

When these issues exacerbate and cause a major lung injury, this is known as acute respiratory distress syndrome.

Lung cancer can appear in any part of the lung, including the air sacs.

Inhaling a lethal foreign substance, like coal dust or asbestos, can cause pneumoconiosis.

Pulmonary edema results from either a lung injury or a related problem (like heart issues), which causes fluid from the lung’s blood vessels to leak into the air sacs.

Risk Factors: According to the American Lung Association, smoking, as well as exposure to air pollution, chemicals, dust, or fumes, can increase the risk of COPD and similar diseases.

3. Interstitial Lung Disease and Others

Diseases that scar the lining between alveoli, called the interstitium, can cause stiffness in the lungs making it difficult for a person to breathe.

Risk Factors: Gastroesophageal reflux disease (which is often related to diet), as well as environmental toxins, can be a risk factor.

Pulmonary diseases affect blood vessels. A blood clot (pulmonary embolism), travels to the heart and then gets pumped into the lungs. If it gets stuck in a pulmonary artery this can cause difficulty breathing and low blood oxygen levels.

Pulmonary hypertension refers to high blood pressure in the pulmonary arteries, which can cause chest pain and breathing difficulty.

Risk Factors: Unfortunately, genetics, surgery, and injury are the most common risk factors.

Pleura diseases involve a different lining – the one surrounding the lungs and chest wall. Pleural effusion happens when fluid collects in the pleura, which can result from pneumonia or heart failure.

Pneumothorax is when air gets trapped inside, causing the lung to collapse.

Mesothelioma is a type of cancer that develops on the pleura.

Risk Factors: Chest injury, as well as heart conditions, or even tuberculosis, could be risk factors.

An estimated 12 million Americans do not know they have a major lung disease.

When lung diseases affect a person, it’s not very “silent.” You will know there’s a problem, once you begin experiencing shortness of breath, wheezing, reduced ability to exercise, or a persistent cough.

If you notice any symptoms, see a doctor as soon as you can. The sooner you get diagnosed, the sooner you can treat the condition. 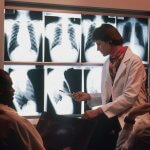